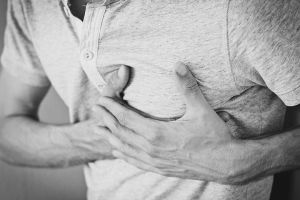 The day, Sunday, September 30th, 2018, was no different from any other day. I worked a little at the office during the day and watched football most of the afternoon. My oldest, Hadley, has an odd obsession for watching football. Asking after every play if the team with the ball won the game. Nevertheless, it allows me to watch something with her other than Octonauts or whatever puppy show it is for the day. After the kids were asleep, we were ending the day watching Master Chef; feeling completely normal.

Then the pain came; an excruciating pain I have never felt before. “My chest!” Is all I could say, as I tried to stand. My heart, which felt like I had just torn a muscle playing ball, was racing uncontrollably. That all known fear of pain down the left arm was there. My body was numb, extremities cold and tingling. Vision, nearly gone. Barely able to speak, my wife trying her best to calm me down. The only thing I could think about was…I needed to get to the hospital and get to the hospital fast!

As my wife woke the sleeping kids and got the semi-dressed as fast as she could, I did everything I could think of to slow my heart rate. Boy, did I fail miserably. The pain only worsened, and to the point where I could barely stand. Finally, in the car, we rushed to the hospital. Luckily, the hospital was only a couple of minutes away.

Now back in the ER, my family was whisked away, and the team of doctors started to work. Everything from that point became a blur. Waking to a doctor saying my name, he began to talk with me about everything. Blood work this, blood work that, levels this, levels that. All I was waiting for was the dreaded words…”you just had a heart attack!” I’m only 33, how could I have had a heart attack. I cycle, I run, I work out, I’m healthy as healthy can be. Then the words came…” your heart is fine, everything is normal”. What-the-hell! What do you mean everything is fine?!?!? He then went on to explain that my potassium levels were low, and sometimes low potassium can mimic heart attack symptoms. Yeah right! Is what I thought. Something is wrong. Nonetheless, we had to leave, nothing was wrong.

Thinking everything was going to be getting better, then the 2nd attack, 3rd attack, 4th attack, and finally the 5th attack. On the 5th attack, of whatever was happening to me, we finally started to run tests. I mean every test in the world. Prodded and poked, scanned, stress test, anything they could think of. I was confident that we would now finally find out what was wrong, and we could get this past us. Us, because it was affecting my family at this point to. Our life was starting to revolve around being at the hospital.

The results came back, showing not that everything was just fine, but that I actually have another artery in my heart that is just as big as the others. Meaning, I could have a blockage, and my dang heart would still keep beating because of how large the extra artery is. So…my heart wasn’t just fine, but it was extra fine. Something that should have been a huge relief, wasn’t. It was a blow to me in a way, what the hell is happening to me. Something is wrong, and I know it! That’s when the next words shot through me with such a piercing pain, and I didn’t know how to handle it. “I’m recommending you to so a psychiatrist” my wife said. My mind, my mind is what’s messed up here. How the hell did I get here; how the hell is something wrong with my mind. I’m a strong-willed man, someone who has gone through a lot, but has always gotten through to the other side. I mean, I’ve seen a lot, but c’mon, I don’t need to see a psychiatrist!

I’m fine, but I’ve never really slept well after my first deployment. I’m fine, but I don’t show very much emotion to anyone. I’m fine, but I have a hard time empathizing with people. I’m fine, but I feel like nobody can relate to me and what I’ve gone through. I’m fine, because I don’t dream about things, but I don’t dream at all. I’m fine! Then it hit me, dude, you’re an idiot! You’re not fine, you’re struggling with something, and it is something you don’t understand. I don’t understand it, because I refused to be someone who could get it; Still unable to say the words at that point. However, as I thought about the last visit to the ER which started all these tests, I had only been released a couple of hours before (the 4th time). I broke down in the parking lot of the hospital. When I say I broke down, I mean I broke down, uncontrollably broke down. I had, for the first time in my life, been broken. I was broken by something I refused to accept, didn’t understand, and simply thought other people with it were simply weaker than I. I was that proud of a man, and I refused to accept the help I needed.

When I think back to the hospital parking lot, I didn’t want to go home. I didn’t want to go home because I was afraid of what I was going to do. If this was it, if this was how I was going to have to live the rest of my life, I was done. I didn’t want that, I didn’t want to live like this. That’s when I told my wife, I have to go back, If I go home…I just don’t know what I’ll do. The hospital admitted me and then we ran the tests. The same tests that I told you before came back negative, and even came back that I had an extremely healthy heart. Then the psychiatrist comments, that’s when it hit me. I still struggle to say the words, PTSD, or Depression, and Anxiety. For some reason I keep thinking that it makes me weak. Which is why I started this blog, to be brave, and to give words to the feelings. Hopefully, through the words will ease my transition into acceptance of the things that I have done and gone through. Through these words I hope that someone else might recognize the same thing, that we can all struggle with something and that there is no shame in reaching out for help.

My name is Kevin Jewell. I am a Hall-of-Fame College Baseball Player. Former United 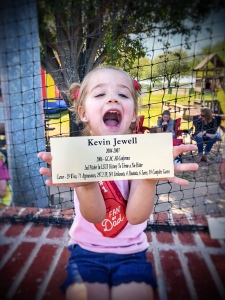 States Special Forces Green Beret. I have a two amazing, beautiful, healthy daughters. I have a wife who I have been with for over 16 years and our marriage and friendship is second to none. I have a great job that I love. A support network that extends throughout the country. If I can struggle, and struggle to understand, anyone can, and I am here to help by telling my story.